This must be obnoxious for anybody living in the real world, aka east of Las Vegas, but the mail delivery lady in Studio City wore shorts on her rounds this morning. 85 and sunny. Meanwhile in the Old Country, my Chicago friends bundled up for the 18 degrees below zero Deep Freeze.

No love for Big Love. Rave reviewes induced me to watched HBO's first episode, season three the other night.

Enough with the Mormons already. They've had two seasons already to get across the basics, but season three, they're still pounding away: don't judge us because we're different, we just want to be normal, ooh, the guy's got three wives, blah blah blah. Mediocre dialogue, one-note characters, Bible-driven soap opera . . . no thanks.

Digging American Idol in the early rounds, but the L.A. Times went way over the top in gushing about former runner-up Jason Castro. The guy's brother auditioned in Kansas City, and Castro was hanging out. He was likened to a "God from Mt. Olympus walking among mere mortals" or something to that effect. Really?

Take a sedative!
Posted by hugh.live at 5:10 PM No comments: 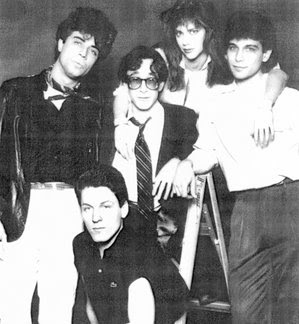 Happy new year. All purpose round-up: My former band The ODD (pictured) is being included in a documentary about Chicago's music scene. Details to come.

Another one of my bands, Huge Hart, will be featured in a history of Chicago's music scene being written by Dean Milano. The book, from Arcadia Publishing, is tentatively slated to hit bookstores late 2009.


And on the Wired.com front, you can link to a year's worth of my blogs covering all things geek including my favorite movie review headline of 2008: The Flesh is Willing but the Spirit is Weak.