Here's my morning dog walk with Oliver in Studio City, Dec. 25 2020. I turn right and go down Laurel Canyon Boulevard past the "LaurelWood" bus stop, where Erik the homeless guy used to hang out, and walk by the house formerly owned by bug-eyed actor Marty Feldman. It's now home to Mark "Flanny" Flannigan, from Dublin, who went to Harvard, moved to L.A. and started alternative comedy hotspot Largo. He seemingly knows everybody and one of his best friends Conan O'Brien, now broadcasts his show from Largo.

Then we come to the rental house formerly rented by the British DP who shot WestWorld and his cute family. Up the hill I pass the ranch house belonging to composer Megan, who's working on a musical about a Jewish woman who smuggled thousands of kids out of Poland. Next door lives Aaron, the 80-something lawyer with red hair who remembers wiping off seats for baseball fans back in the depression and sticking out his hand for a nickel. The batboy. His wife Millie, a brash New Yorker always dressed to the nines. Their son Ethan, a genius repairman of video games.

A bit further is the "hippie shack" owned by a law professor from University of San Francisco. Then a forested hollow. Here's where I often run into Tommy, an adorable border collie, and his owner Neil Clark, who seems to know pretty much everything from how to unlock a locked electronic gate and the best time to pick apples to the fact that the guy in the red sports car who just whizzed past us is William Shatner, who lives at the top of the hill

Reversing course I pass the judge's house, who told me my late dog Huck looked so formidable he would fit right in sitting next to him in court. 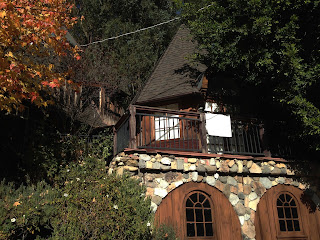 Now I approach the landmark "Hobbit House." Formerly owned by Jane Fonda and "My Name is Earl" sidekick Ethan Suplee, it's made of cobblestones and Middle Earth type roofing. According to Neil, the compound kept expanding to accomdate orphaned children, which is why it's such a sprawling jumble.

Downhll to the tree-lined "Bucolic Stretch." Behind the gate on the left, Frick and Frack lurk, waiting to bark their brains out. Officially known as Dudley and Eddie, the smaller dog plays the alpha role. "Eddie runs the show," his owner once told me.

A hip hop producer reportedly lives in the white modernst mansion next door but never comes out when I'm walking. Patton Oswald lives beyond the Bucolic Stretch in a contemporary house, so I'm told (by Neil), although I've never run into him.

Somewhere along the way I often see Alex and her little Charlie dog. Living in a fairy tale-like glade is bulldog Baxter and John, the crew chief for "Big Brother," and his Emmy-nominated costume designer wife Jodie Stern ("Watchmen"). I might run into Irena, the Iranian expatriate who voted for Trump and whose husband Jerry used to regale me at the Dona Pegita bus stop with a litany of health-related misadventures. Tromping back up hill, I might pass Meg and her tiny dog Ridley, who live in the ranch house formerly occupied by the Palestinian character actor (see below) and his family. Then. . . home.